A wheel to a tire to rubber mulch…

A wheel to a tire to rubber mulch…

We could not do what we do without the invention of the tire, but in all reality, the people that invented the tire need to thank those that created the first wheel.  Sounds a bit odd, if you really think about it, a tire is a wheel, but a wheel does not necessarily have to be a tire.

The concept of the wheel it old, really old.  Some scientists believe that the first wheel was created as far back as 9500 B.C. and was most likely carved from stone, so not the most versatile piece of equipment, but it did the trick for about 3,000 years.  Around the time of 6500 B.C. we opted for some lighter weight materials and began to produce wheels from wood and began to experiment with the concept of using an axle so we could put the wheel to work for us.  We sort of rested on our laurels and achievement for a while and did not create the first wheeled vehicle for yet another 2,000 years.  After some more experimentation we were really getting places around 2000 B.C. when we created a spoken wooden wheel and hence the chariot was born.

So when does the wheel become a tire?  Seems like a pretty simple question, but to actually determine who can take credit is left to you.  Back around 1000 B.C. the Spartans figured out that of you took a wooden wheel and covered it in steel it would last a lot longer both for everyday needs and the always present battle situation.  While technically this is the first tire, it took until the 1700’s for someone to actually call “what they came to discover” as the modern day tire.

The earliest tires were bands of iron (later steel), placed on wooden wheels, used on carts and wagons.  The tire would be heated in a forge fire, placed over the wheel and quenched, causing the metal to contract and fit tightly on the wheel.  A skilled worker, known as a wheelwright, carried out this work.  The outer ring served to “tie” the wheel segments together for use, providing also a wear-resistant surface to the perimeter of the wheel.  So this is where the word “tire” comes from…although it is a battle between the French and English as to who coined the word.  But if you really think about it they have nothing to fight about as the Spartans were actually the ones that invented it, they just didn’t take the time to put a name on it. 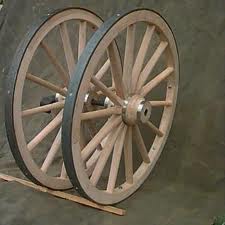 When it comes to who invented a tire that could be inflated – something similar to the modern day version – there is once again confusion.  It was settled in the courts and the winner is Scotsman Robert William Thomson.  Thomson later partnered up with a man we all know, Charles Goodyear and developed the process to vulcanize a tire to add longevity and strength to the rubber.

When we started to manufacture and sell products made from 100% recycled rubber in 2000 they were almost 5 billion tires in landfills across the country – today this number is a mere fraction thanks to our recycling efforts and the efforts of others.  Too often we tend to look in only our backyard for information, solutions and answers to questions, but our need to further increase tire recycling is needed not just here but across the world.  In the United States we discard about 300,000,000 tires each year, or less than a third of the worldwide number.  Do we know if the other 700,000,000 tires that are being discarded around the globe are being put to good use or given a second life?  Let’s take the lead in the recycling movement but also look beyond our city, state or country and try to figure out how we can better the world that we live in.