So you just purchased that first home with the white picket fence, or perhaps bought that car you dreamed of with the metallic silver paint job.  Speaking of paint, you may have spent the past 6 weekends working day and night to paint your home and save a few precious dollars.  All pretty exciting accomplishments and moments to enjoy…but what if you woke up to find black spots covering these prized possessions?  What if you scrubbed and scrubbed and they wouldn’t come off?  If it were me I would want to get to the bottom of the situation and find out who or what was responsible.

What if the person responsible was actually me?  Not that I went out and painted black spots on everything outdoors that I own, but a decision I made resulted in the irreparable damage…I installed wood mulch…

Mulch lends a tailored, streamlined finish to a landscape, but spreading wood mulch too close to your dwelling or driveway might not be such a good idea, especially if your home or car has a pale exterior.

If you spread wood mulch too close to your home you may find yourself dealing with artillery fungus.  The fungus, also known as “shotgun” fungus, thrives on moist, rotting wood mulch, and forcibly ejects tiny black spores that look like specks of tar toward light-colored surfaces, including siding and automobiles. 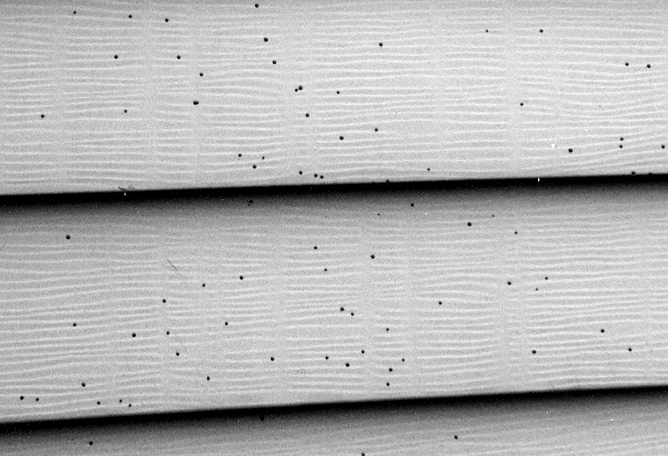 Here is where it goes from bad to worse – according to experts, removing the unsightly, sticky, stubborn spots, which don’t cause any structural damage, is extremely difficult and, in many cases, impossible.

In a recent article by home improvement guru Henri de Marne, he goes into some additional detail on the problem…

Q. I bought a new house in 2006, and the builder used ground-up trees from the surrounding marsh areas to make mulch for the house.  After three years, I noticed a growing accumulation of what is called “artillery fungi,” little black dots, all over the siding where the landscaped areas with mulch are located.

A landscaper told me that it was caused by a mold in the mulch, so I removed all the old mulch and put down new, fresh hemlock.  But the black dots continued to become more numerous. Apparently, the mold is in the soil, because the landscaped area that is causing most of the problem gets very little sun.  I replaced the mulch in that area with river stones over a felt mat to try and keep the mold from throwing more black dots onto my siding.  I have had the house professionally power-washed three times and none of the washings have had an effect on the black dots that are there.

Is there any kind of chemical treatment that I can use to remove these unsightly black dots?  I have used magic eraser in the past, which can remove the dots one at a time with some serious elbow grease, but I am almost 70 years old and I won’t live long enough to clean the literally thousands of dots that are on the siding.

A. The ballpoint-sized black dots on your siding are indeed artillery fungus, which is coming from decomposing mulch next to the foundation.  The fungus explodes in the spring or fall when the temperature is ideal for the spores to do so, and can be propelled 20-plus feet into the air, which is where it gets its name.  Power-washing is not effective.

It is difficult to remove without causing serious damage to any siding and other surfaces onto which it attaches itself.  On wood siding, repair is possible, but not on vinyl, aluminum or steel.

On painted wood siding, a sharp putty knife can be used, and any damage to the wood can be patched with exterior wood putty.  Then, the siding can be repainted.  Another option is to paint over the dots after a thorough cleaning, but they will still be there as small lumps.

The only way to prevent it in the future is to put new organic mulch over the old every year, remove the old mulch entirely or replace it with rubber mulch, available in garden-supply stores.