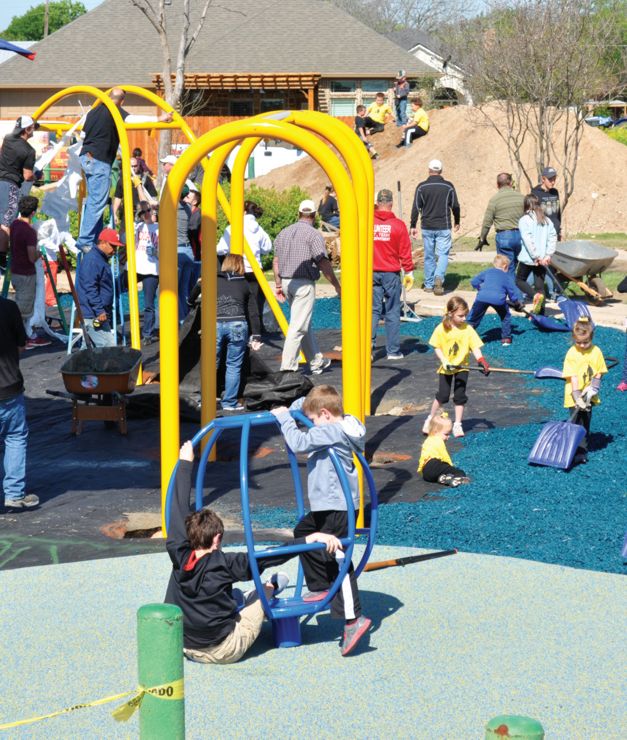 The saying “Out of the mouths of babes…” comes from the Bible and is used to illustrate that sometimes children don’t just say the darndest things, they can also say the most insightful, most motivational things.

Parker Pustejovsky was 4 years old when his father Joey, a city official in the town of West, Texas, died in an April 17, 2013, fertilizer plant explosion that claimed the lives of 14 others. Joey was a first responder to a fire that sparked the cataclysm that registered as a 2.1 magnitude tremor on seismographs. Windows blew out 7 miles away.

Parker’s grandad Joe lost not only a son but the house he shared with his wife, Carolyn. One day a month or so after the blast, Parker asked his grandparents—he called them GG and PePaw—if he could see the destroyed house, and after a brief visit, Parker asked about the old playground, which he could see amid the rubble. It had been serviceable, with outdated equipment and little room for any more than 10 kids at a time. 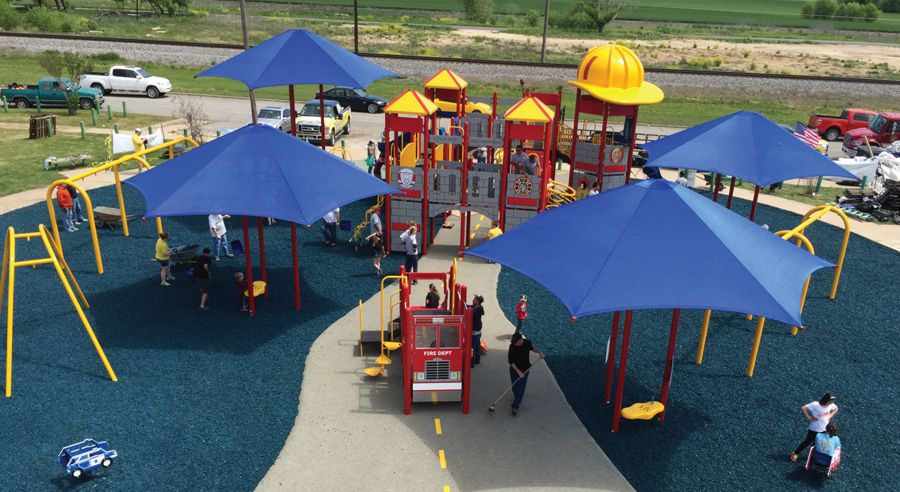 Parker’s dad had been formulating plans to upgrade the park at the time of his death, and his grandad says discussion at home of the future remodel may have prompted what Parker said next.
“I’m gonna rebuild the park,” he said.

Joe and Carolyn quizzed Parker on how exactly he’d afford to do that, Parker said he’d sell hot dogs. Joe had his wife to ask Parker again a week later, just to see if he was committed or was just being a 4-year-old, and Parker repeated his wish.

“The first thing that came to my mind was, ‘You’re gonna have to sell a lot of hot dogs to pay for a playground,'” Joe said. “Little did we know, a couple fundraisers later we had $230,000.”

The result of fundraising and donations from the community, outside of the community, and from companies that provided construction and playground materials is a new playground that opened last April. Joe hopes in a year or so other amenities, like a pavilion and working restrooms, will be complete. The kid portion, the part Parker was surely imagining, is finished with its contribution to the ongoing healing of the town. 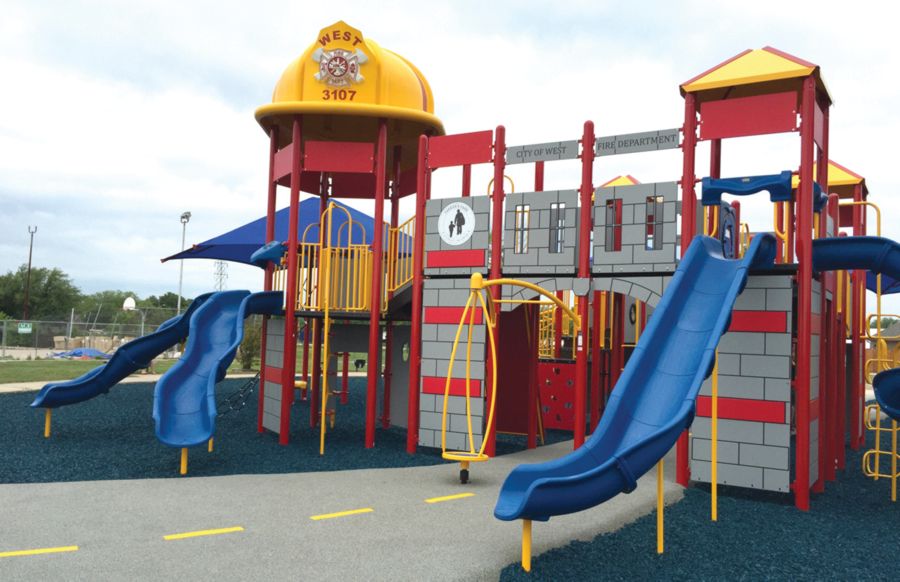 “It’s an awesome area for the kids to come play,” Joe said. “There’s things for all ages, from kids who can just walk on up to young teens. We’re really proud of what it is.”

Joey Kolar was a family friend who put the first fundraiser on social media, and Shermco Industries, an electrical infrastructure services company out of Irving, Texas, stepped up by bringing $21,000 of debit cards to the event. Shermco employees bought hot dogs from Parker for $1,500 and $500; other people bought water bottles for $100 each. Hot dogs were a theme at every fundraiser.

His company has a nonprofit Christian charity that builds playgrounds for communities in need, Playgrounds with a Purpose. Child’s Play/Burke won the bidding to help with the project. 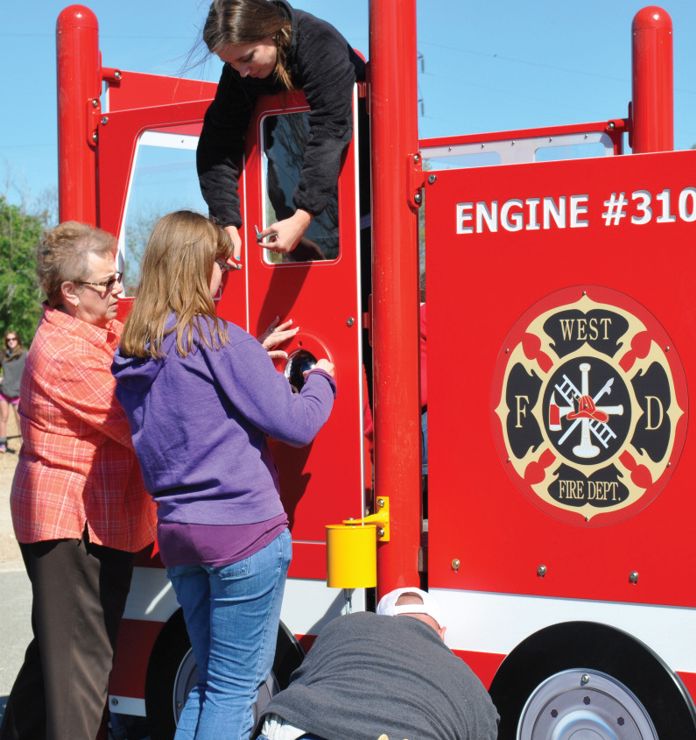 “We agreed to do 100 percent of the design, including all the custom items, and oversee the entire project from budgeting to design to installation,” Robertson said. “We also reached out to my manufacturers to request additional discounts and special pricing and contributions to the project. We agreed to donate 100 percent of any labor on the project, around $35,000 to $40,000. And last but not least, we helped organize and oversee the community installation of the playground.”

Ground Smart Rubber Mulch donated two truckloads of Blue Rubber Mulch, a $35,156 value. The other company donating time, labor or material include Vitriturf Rubber Surfacing. Posts and columns that needed to be professionally installed awaited the community build, another day for hot dogs and town teamwork.
Child’s Play brought 14 installers, and put one each in charge of 14 groups of volunteers. Joe Pustejovsky said about 150 people helped, and the work was done by 2 p.m.
“Everyone was digging holes, pouring concrete, assembling pieces of playground stuff, scattering rubber mulch,” he said. 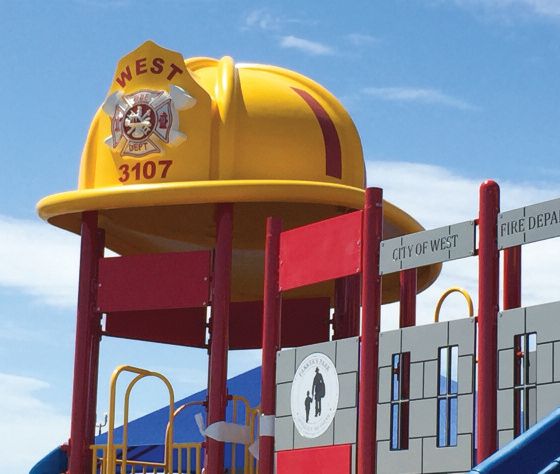 Robertson said Phase 2 has already begun; a pavilion, restrooms, a tennis and basketball court, and arched entryways are aspects Robertson can share. He said other plans are surprises, and Phase 2 could be done by year’s end.

“While the tragic events should never be forgotten, the future of West is bright,” he said. “The people and the town have too good of a future to be defined by this one single tragic event. One day the children of today will be telling their children how the town came together and rebuilt the playground and that they were there helping.”

Parker’s grandpa still chokes up remembering, not just the losses, but the beauty of Parker’s original idea, and the kindness of strangers.

“Everything like this is a big part of recovery,” Joe said. “It’s been a healing, since we lost our son in the explosion. It certainly was a healing, and we lost our house and we were rebuilding it all this time, so even for us it was a healing experience to see the generosity and the outpouring from so many different people from all over.

“There’s still a lot of construction going on around West and maybe next summer it’ll all be finished and it will be what it was intended to be 100 percent. It’s great right now.”